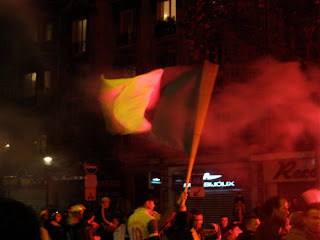 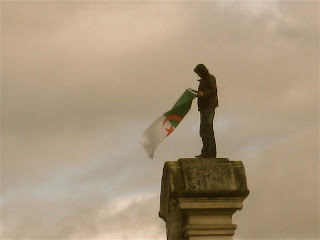 On paper, Paris is a French city. One can't drag Paris across a map to China, Vietnam, nor Algeria, no matter how hard one tries. On any given day, however, one can walk out their door and feel like they are in Haiti, Sri Lanka, or West Africa, among many other places.

Paris, like New York or San Francisco, is full of ethnic communities. The southern half of the 13ème, the suburbs to the south of it, and also the Belleville neighborhood contain at least 50,000 Chinese, Laotian, and Vietnamese nationals, where you are just as likely to see signs written in a Chinese Language as you are French. Up in the northern quadrant of Paris and its surrounding suburbs, one can find a North African (mainly Algerian) population of at least one million. When Algeria won its qualifying match for the World Cup in late 2009, thousands of people spilled out onto the street next to ours to celebrate. It was the next closest thing to being in Algeria itself. Just a couple of blocks east near Château Rouge, one can walk through the West African and Haitian markets that spill out out of the shops into the streets. Between the La Chapelle metro and Gare du Nord in the 10ème, there is a large community from the Indian subcontinent where one can easily find a Tamil-language newspaper or a shop selling traditional Indian dresses. When walking in either of the neighborhoods, one gets the impression of being transported somewhere else.

The above mentioned should give you the idea that Paris has a very large immigrant population. The city of Paris itself contains around 2.1 million people, which doesn't sound that large. The suburbs, however, contain somewhere between another 7 to 12 million. The reason there is such a gap in these numbers is mainly because the French government has no idea how many immigrants are actually living in the Paris metropolitan area. Most of the immigrants do have legal paperwork to keep them here in France, nonetheless there still is a large illegal immigrant population in Paris and its surrounding banlieues.

France is not the most difficult country for a foreigner to enter. It might be one of the easiest. France shares a border with Belgium, Luxembourg, Germany, Switzerland, Italy, Monaco, Andorra, and Spain. There are no border patrols waiting at each entry point into France (Switzerland is an exception). It's about as easy as crossing from Missouri to Illinois. For example, if someone wanted to enter France from Morocco, all one would have to do is cross the Strait of Gibraltar into Spain by ferry, perhaps flash their passport, and catch a bus or train to France from there. Once in the European Union, it is rare when one will be hassled for their papers.

Sometimes, illegal immigrants enter the country and do very little to hide their status. There was a tent community in the port city of Calais, which is the crossing point to head over to the United Kingdom, that contained close to 800 migrants, mostly Afghani, that only recently has received attention from authorities. The camps came into existence in the Calais area around 2002 and were torn down on September 22, 2009. The occupants were arrested and were to be offered 2,000 euros for returning to their country of origin, though they will also be offered the chance for asylum here in France as well (Daily Mail, Sept 22, 2009).

From personal experience, I do not carry my French identity card with me, nor do I carry my passport. I think the only time I've ever been asked for my card was in the emergency room when I had to get some stitches for my lip in December 2009. Even though I did not have it, no one really seemed to care.

Even more impressive is crossing by plane. When I came over as a student in 2005, I had to fill out a questionnaire regarding my trip and my whereabouts during my trip, among other things, and I was to turn it in to a border patrol officer when I would pass through customs. I could not find a pen, so I decided to ask when I stepped off the plane. I asked the border patrol officer in pidgin French for a pen, and he just waved me through, basically telling me not to worry about it. When I came back in 2008, France had stopped giving out the questionnaire to planes arriving from the United States entirely. On one of my crossings from the United States, I handed over my passport, the officer looked at the back of the passport (which is blank), and handed it back to me without even opening my passport, let alone even asking from which country I came. I don't know if the treatment would have been the same had I been flying in from Africa, but it is certainly less intensive than what I've gone through in the United States.

As I have shown in my previous two blogs, getting a visa in this country can be exceedingly difficult. If one does not have a job nor family, nor has enrolled themselves in a university in France, it is next to impossible to obtain. That's why some people just skip the whole process and just work in the black. Our old plumber, who in reality fixed just about everything, came from Tunisia a few years back. He's told us he would love to go back home at some point, but as he doesn't have any working papers in France, this would send up a red flag as he crosses back into Tunisia, which could block him from coming back into France. Alas, he just stays in France, and seems pretty content with that.

If you have ever visited Paris, you have probably seen the African guys that sell Eiffel Towers and other merchandise near the real Eiffel Tower and the Louvre. For the most part, these guys do not have a permit to sell merchandise in these spots, and furthermore, probably do not have working papers. At the Louvre in particular, there are at least half a dozen of these guys a day selling their wares, spread out on a blanket. On this blanket, there is usually a piece of string that is attached to all four corners and creates an x in the middle. If there happens to be a police officer coming, all they have to do is grab the x, which cinches the bag shut, and run off into the bushes. The police usually arrive around the same time everyday, and most times I see them come by way of a slowly trotting horse, which gives the illegal vendors plenty of time to run away. There's usually someone watching for the police just in case they come by surprise. Once the cops have done their sweep, the vendors open up their bags, spread out their merchandise, and go back to doing exactly what they were ten minutes before.

Not everyone that escapes to Paris from their homeland is able to find a job. In the banlieues to the north of the city, the unemployment rate is staggeringly high, in some cases close to 50% for young males. Crime is rampant and in some cases, the police just avoid it and leave it to the gangs to sort things out themselves. The schools are in poor shape, and even if some get through an education in one of the schools in this area, they will be hard pressed to find a steady job. On the other hand, one can make hundreds of euros a day selling drugs, which is more than they could probably ever make in a legitimate occupation. It makes for some difficult decisions.

As a whole, people don't really seem to be bothered by the immigrant population in Paris, whether legal or illegal. However, there exists a political party called the Front Nationale, headed by Jean-Marie Le Pen, which claims to be working for "France for the French". Le Pen constantly rails on how the foreigners ruin everything in France and ruin what makes this country great. Surprisingly, he made it to the final round of voting for President in the year 2002, where he was easily defeated by Jacques Chirac. The main reason it seems he made it that far is because many people who did not want Chirac as president as a whole didn't really seem excited about any of the other candidates, so they voted for Le Pen because he seemed the least likely to win. When it was announced that he was second in voting in the first of two rounds, the French seemed embarrassed, as his only real supporters seem to be paranoid geriatrics and xenophobes.

This could only be considered an introduction to the plethora of issues surrounding the immigrants, both legal and illegal, in the Paris metropolitan area. I will try to break down some other issues on the matter in further entries. If you happen to have any comments, suggestions, or things you would like to know, let me know and I will do my best to provide a solid response. Thanks for reading.

Both photos come from the day when Algeria qualified for the World Cup in Fall 2009.

If you are traveling to Paris and looking to see (and eat) what French people really eat and take a walk around some cool neighborhoods of Paris, look into my tours at culinarytoursofparis.com
Posted by jp4tne77 at 5:04 PM