Mass Tourism: Why Do We Visit What We Visit? 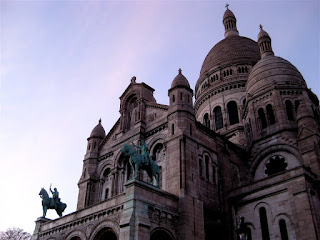 On tour, I usually begin by doing some small talk with the customers. Occasionally this method will allow us to form some common bond, whether through birth place or interests. During my interrogations, I almost always ask "What will you be doing while you are in Paris?" Almost everyone says the exact same thing: Eiffel Tower, Arc de Triomphe, Notre Dame, Louvre, etc. A few of these things deserve the attention, whether or not you are a fan of artwork or gothic architecture and the like. There are some, however, that make me wonder why they are such a "must see".

For example, many tourists want to go to the Moulin Rouge. A lot of people actually spend an outrageous amount and go through with it. When I meet someone that happens to be visiting the world-renown cabaret, I ask if they have ever been to a cabaret before. Far more often than not, they say no. I ask if this would be something that would interest them in their hometown, and once again, the answer is usually negative. Alas, if you would never attend a musical cabaret in New York, Sydney, London, or wherever you come from, why in the hell would you do it in Paris?

The answer is simple. People want to be able to tell other people that they saw it. They won't be able to comment too much on the service, nor the show itself, but they can at least check that off their list.

When people go on trips, it is fairly rare that they come into a city without a general idea of what they are going to see and do. If it is their first time in a city, they are going to have to get that advice from somewhere else, meaning either a tour book or a friend, who either got their information from another person or a tour book themselves. Thus, most visit the same monuments as their predecessors. In addition, by doing so, they establish a link with those predecessors, and can say "Hey I've been there, too". For example, with the Mona Lisa, almost every tourist that has been to Paris has seen it. People go because her fame has grown exponentially through time, and they, the visitors to Paris, would like to judge it themselves. Rarely do people visit her to admire da Vinci's masterful brushstrokes which seem to be non-existent upon his subject's face. Rather, people seem pretty disappointed. The comment I hear most often is "I thought she would be bigger." You would think with so much disillusionment that people would stop spending so much valuable time going to see it, but it still gets more visitors than any other painting in Paris, perhaps even the entire world. I'm not in total disagreement with the judgement that La Joconde's fame seems to be disproportionate with its size and intricate detail (look at paintings by Meissonier for the latter), as the Louvre has literally thousands of other equally impressive paintings. Nonetheless, people will run by every other painting in the Italian wing to visit the Mona Lisa, pretty much because it is usually the only work whose existence they were aware of before their visit.

I wish I could say that I have not been guilty of coming into a trip with a sort of checklist of things to see and do, but like most others, I have come into trips with some suggestions to see certain museums and monuments, even if I really didn't give a damn about the collections within. When Julie and I visited a friend in Madrid in October 2008, I came up with a rough list of things I wanted to see. Aside from visiting Plaza Mayor and El Retiro, I felt that we should try to see at least two of these three museums: Museo del Prado, Reina-Sofia, and Thyssen-Bornemisza. Many of the most famous "must-see paintings" in these musems I had never heard of, but felt as a visitor to Madrid, that I was obligated to try and see them.

The first night there, as so many do on a Saturday night in Madrid, we went out and partied until 4 or 5am. Around noon on Sunday, we went to a market, shopped for food to make for lunch, and ate a great meal. By this point, I was already figuring that we could probably only do one museum now, but instead, we decided to sit on the balcony and listen to our friend play the guitar for an hour or two. It was during this time that I realized how much I preferred relaxing and absorbing the culture and my surroundings to standing in line at museum after museum. To sum up the wise words of our host,"Whenever I travel, I prefer to tell my hosts 'Show me your life!' ". After that experience in Madrid, I understood what he meant and why he saw this as the way to travel.

So, if I was to give advice to those visiting Paris, probably the most important thing I could say is to try not schedule too much. If you run around to 3 or 4 museums in a day, chances are that you won't really get a feel for Paris, and will probably be quite exhausted and stressed by the end of the day. Of course, you should probably see the Eiffel Tower, but that doesn't mean you have to wait in line for four hours to go up the elevator. The Moulin Rouge will probably not convince an avid football fan to get season tickets to their hometown cabaret. Take some time for yourself. Go sit for two hours at a café over one cup of expresso. Go lounge in a park with a bottle of wine and a baguette and fall asleep under a tree. Just go for a walk, meandering aimlessly until you stumble upon a good bistro or beautiful courtyard. If you find a good balance between seeing a couple of those "must-sees" and taking time to get a feel for your surroundings, I guarantee that you will have a much more satisfying vacation than one spent vacantly oggling every painting and sculpture in Paris.

If you are traveling to Paris and looking to see (and eat) what French people really eat and take a walk around some cool neighborhoods of Paris, look into my tours at culinarytoursofparis.com
Posted by jp4tne77 at 10:34 AM