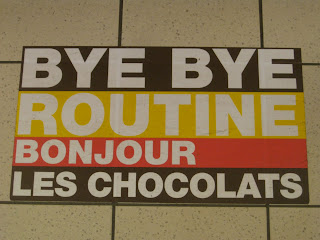 If you think that you do not speak French, you might already know more than you think. The gap which exists between the French and English Languages seem to be inching closer together every day. While it may seem daunting, French is becoming increasingly approachable for English Speakers.

Leading up to the 20th century, French and English already had many words that were the same in both languages. This is a result of numerous invasions, both by the French and the English, against each other. As a result of William the Conqueror's invasion at the Battle of Hastings in 1066, French was considered the language of the ruling class for close to 300 years in England (A History of the French Language). French names such as Robert and Richard became very common among the upper echelon. Today, most words in the English language that end with -tion, -ant, -ont, -ent probably owe their roots in the English language to this invasion.

In 1964, René Etiemble, Professor of Comparative Languages at the Sorbonne (France's most widely known university), wrote a book called Parlez-Vous Franglais?. This book declares that the French language is losing its status and importance as English is taking its place. Not only that, the English language is seeping into the French language, much as a weed does over a garden. I've heard some accounts that when this book was written, about 25% of the French language was already English, and I would not be surprised if it is higher than that today. Etiemble states that if the French language continues to surrender its ground to English, French students will no longer be able to read authors like Voltaire or Jean-Jacques Rousseau, let alone Hugo or Zola.

To combat this, an organization known as the Académie Française was given a wake-up call to defend the French language. This is the body that is known to be the official authority on the French language, and by one account I heard, these guys still dress in Napoleonic era clothing in their meetings, complete with swords, as they are "defending" the language from outside sources. It became a sort of witch hunt to track down those detestable English words, throw them into the Seine, and replace them with a more French equivalent. For example, efforts were made to change "le weekend" to la fin de la semaine (the end of the week), "le walkman" to le baladeur (the walker), and even le hot-dog to le chien chaud (the hot dog).

Unfortunately for the Académie, few of these words actually stuck in the consciousness of the French. Some of these phrases were viewed as ridiculous and flat out ignored. However, the Québecois actually use a lot of these Académie created words, and even created some of their own. As they are surrounded by all English speaking states and provinces, the people of Québec are more isolated, and as result, more willing to defend one of the last remnants of their uniqueness.

Why is English becoming so popular in France? The media certainly helps. It is a law here that 50% of the songs played on a given radio station have to be by French artists. Even then, most stations stick to the bare minimum and play French and English language songs half and half. Furthermore, many of the popular movies over here happen to be the American ones. France does put out some great films, but the output is far exceeded by the United States. When English language films are screened in France, in most cases they are shown in the original format, just with French subtitles, which can be a great exercise for learning slang, both in English and in French.

Technology has also helped advance the spread of the English language in France. As new technologies continue to emerge worldwide, the French cannot keep pace to create a French equivalent for each new product or invention that surfaces. Thus, they just use the English word. Windows, iPod, Playstation, Email, Segway, and Satellite among many others, are pronounced essentially the same as they are in English (minus the eating of the syllables that Americans like myself tend to do). The only one I can think of that is different in French from English is computer, as pronouncing this word with a French accent will cause you to say "fucking whore". So it's probably not a bad idea that they choose to use ordinateur, which translates to organizer, instead.

In the last few years, it seems the Académie has started to give up. I feel that at least half of the billboards that I see here in Paris are in English. They are required by law to put an asterisk next to the English phrase and translate it somewhere in the advertisement. The translation is usually found in small letters towards the bottom of the ad, barely legible if one happens to be standing on the other side of the métro platform for example. The one I found above was from walking out the door of my apartment to the grocery store. As I started writing this entry, I realized I didn't have any photos to prove my point, and it took me only 5 minutes to find a great example.

To name a few, outsider, boost, feeling, and coaching are the same in both languages and have recently been introduced into the French vocabulary. These words do not have French roots. As the French language is only 1/5 the size of the English language, sometimes it is just easier to use the English word, rather than create a wordy French equivalent.

There's no need to feel stressed about learning the French language. Whether or not they are aware of it, an English speaker already has a good head start.

If you are traveling to Paris and looking to see (and eat) what French people really eat and take a walk around some cool neighborhoods of Paris, look into my tours at culinarytoursofparis.com
Posted by jp4tne77 at 2:27 PM